I believe it is "better" to make lots of smaller attacks rather than being lazy and making one big one. Because the response times were so low, the slowest point normally was not the network connection therefore increasing the threads would not help a great deal in this case.

See the benchmark results! This is probably the "most well-known" tool as it has been around since August with the public release of v0. Here are snippets from the documentation readme. We could use wireshark or tcpdump to monitor what is sent to and from Hydra, as well as use the in-built "debug" flag -d. However, the issue with all of these is there is an awful lot of data put on the screen, which makes it harder to understand what is going on.

Incomes the use of a "proxy". Rather than it being used in an attempt to "hide your IP" by using another machine fisrt in order to connect to the target, instead of going directt , we can use it to inspect the traffic. Using Burp Proxy Suite , we can monitor what is being sent to and from our target.

This way we can check to see if Hydra is acting in our desired way and reacts correctly when there is a successful login. By using Burp, we are able to quickly filter, sort and compare all of the requests. It is also worth noting that Hydra does come with a verbose option -v to display more information than standard, but not as much as debug! Becuase we are debugging, the thread count is set to 1, using a larger timeout value as well as to wait after each thread finishes.

Note, if we are going to use Burp, make sure "Invisible Proxy Mode" is enabled see below! The top code snippet, will brute force a single user , the admin user and then stop the attack when the user is found -F. It will also show all combination attempts -V as well as blacklisting a certain phrase a successful login will NOT contain this value.

The bottom one will brute force all five users which are thereby default in DVWA , but will take much longer as there are many more combinations to try. It will also not display combination attempts missing -V. Rather than looking for a page that does not include a certain value, this time look for a certain phrase once we are logged in whitelisting. More about blacklisting vs whitelisting at the end. Patator is not as well-known as either Hydra, Medusa, Ncrack, Metasploit, or Nmap probably due to the it being the "youngest" tool In November v0.

Patator is incredibly powerful. It is written in python, rather than C which makes Patator use more system resources , however, it makes up for this as it has an it has an awful lot more features and options. It is not straightforward to use, and there is limited documentation for it. I also found checking the actual source code to be helpful as it gave me a better understanding.

It is written in Python, which makes it easier to understand. Patator is more verbose in its output compared to Hydra, as out of the box Patator will display all attempts made you need to tell it to ignore requests based on a parameter. Plus, it will have various columns displaying results which thread made the request, size of response, code response etc.

This helps to build up a bigger picture overall of what is going on with the attack. Patator has more of a "fuzzer" feel to it, rather than being a brute force tool. Unless you tell it not to, Patator will not only do it but display the result of it and keep on doing it until instructed otherwise. For whatever reason, if the displayed output is not enough, then Patator can be put through a proxy to monitor its actions Burp does not need to be in "Invisible Proxy Mode". You may have noticed, we had to create a wordlist to match the same values that were sent when using Hydra.

You can see what the correct value was to login password , based on the "page size:content length" reported back , The first value is also different due to the extra line added in from DVWA core, which was noted when we did the baseline responses. This means, Patator will keep on making requests with a user after it has already found the password.

Burp Suite has a proxy tool, which is primarily a commercial tool, however, there is a "free license" edition. The free edition contains a limited amount of features and functions with various limits in place, one of which is a slower "intruder" attack speed. Burp Proxy has been around since August This section really could benefit from a video, rather than a screenshot gallery.

Burp needs a request to work with. Either we could write one out by hand which would take a while , or we can capture a valid request and use that. At this stage, we are telling what values to attack with going to use the original three debugging values. Now we are going to alter the options as to how Burp behaves.

This is an optional stage; however, it makes the output easier to see. See why later. Note, there will be an alert explaining that the speed will be limited due to the "free edition" of Burp. Result : Again, you can see the request and payload which caused a different result aka a successful login.

Note, Burp will continue to go through the wordlist until it reaches the end. It will not stop at a "valid login". This might not be the case in later versions or I missed a method to stop this from happening. Let us now define our usernames to use. This is ID 1 as it is the first value reading left to right, top to bottom. Speed limits may change in later versions too.

Result : Because Burp is not fully aware of a successful login, it will not perform any differently like Patator , as they are both "fuzzing" the web application. This means it will do every user even after successfully logging in until the end of the password list. It will try and make every 30, requests to the target web application and with the speed limitation in place so this is less than ideal. Note, there is a feature request ticket to include this feature into Burp , so in later versions it may be supported.

This is because either I did not use the tool correctly or the tool does not yet support the necessary features and options. Medusa is an older and more well-known brute force tool I cannot find an exact release date for v1. However, the last stable update was in May , so it does not appear to be under development still. I could not see a way to overwrite this without recompiling the program so this would not have made the login screen brute force impossible. TL;DR : Nmap does have a script which is able to brute force web forms, however, it is unable to set custom headers in the request, so we cannot log into DVWA.

TL;DR : Ncrack v0. It is only able to-do HTTP basic access authentication. Ncrack was written in , and has not been updated since. TL;DR : Metasploit framework v4. They are really rough templates, and not stable tools to be keep on using. They are not meant to be "fancy" e. However, they can be fully customised in the attack such as if we want to use a new anti-CSRF token on each request etc.

I will put this all on GitHub at the following repository: github. Each test was repeated three times and the average value was taken. The value displayed are in seconds. Both Hydra and Patator will stop when they find the first and only valid user admin:password. This means they will produce requests in order to find the successful account. In addition, there was not any waiting between threads ending. There were two different timeout values used 3 seconds and 10 seconds , which is shown in the tables below.

For the reason why Hydra is noticeable slower than Patator , see the medium level benchmark results. The benchmark results are only for a single user even though the username comes from a wordlist. I believe this is where Hydra would start to outperform Patator as it is able to stop testing a value when a user is found, therefore it will produce less requests overall. The test would be, how many number of successful logins vs the time taken.

None of the tools are not "perfect". I would say there is not a single "go-to tool", as each is better in certain cases. Hydra at designed to be an " online password brute force tool ", and has the features and function we need to-do this type of brute force. I found it is the "best" tool to brute force multiple users , as it will produce the least amount of requests.

It has many more features and options than Hydra. Burp Suite is also a fuzzer, as well as offering a lot of other options it is a multi-tool - hence "suite". Unless you have a commercial license, the free version will be much slower than the other two options. The upside is, it allows you to-do the most complex brute force attacks even in the free edition. This is where most people get it wrong.

You have to check the webapp what a failed string looks like and put it in this parameter! This script uses the unpwdb and brute libraries to perform password guessing. Any successful guesses are stored in the nmap registry, using the creds library, for other scripts to use. The script automatically attempts to discover the form method, action, and field names to use in order to perform password guessing.

Use argument path to specify the page where the form resides. If it fails doing so the form components can be supplied using arguments method, path, uservar, and passvar. The same arguments can be used to selectively override the detection outcome. 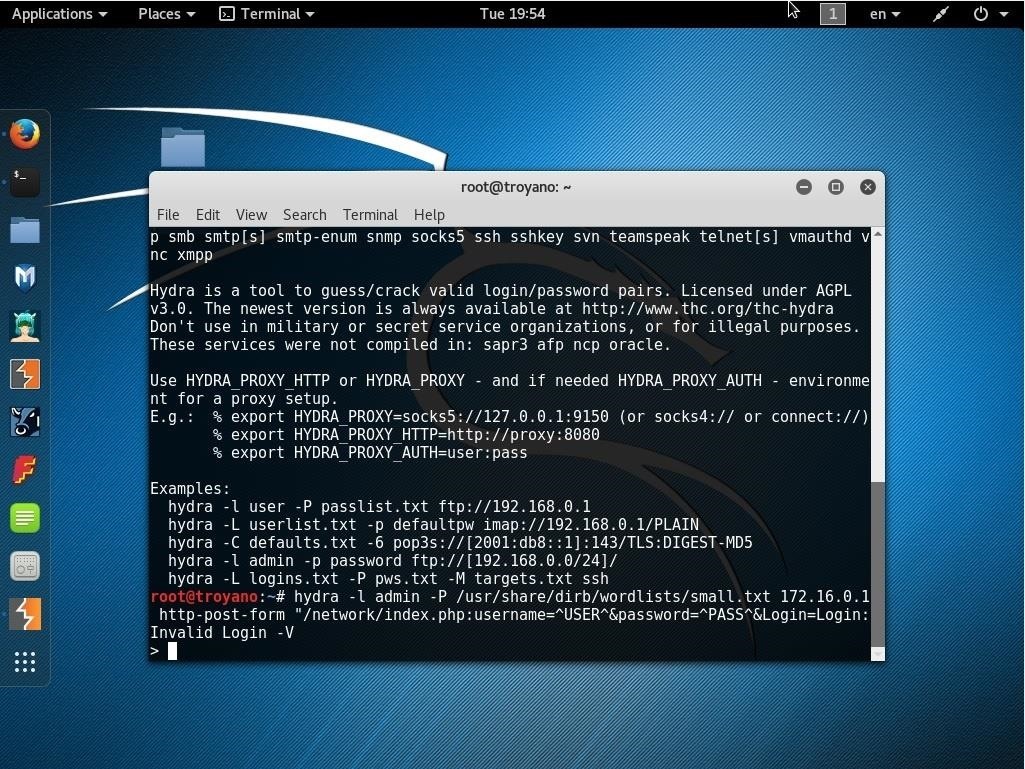 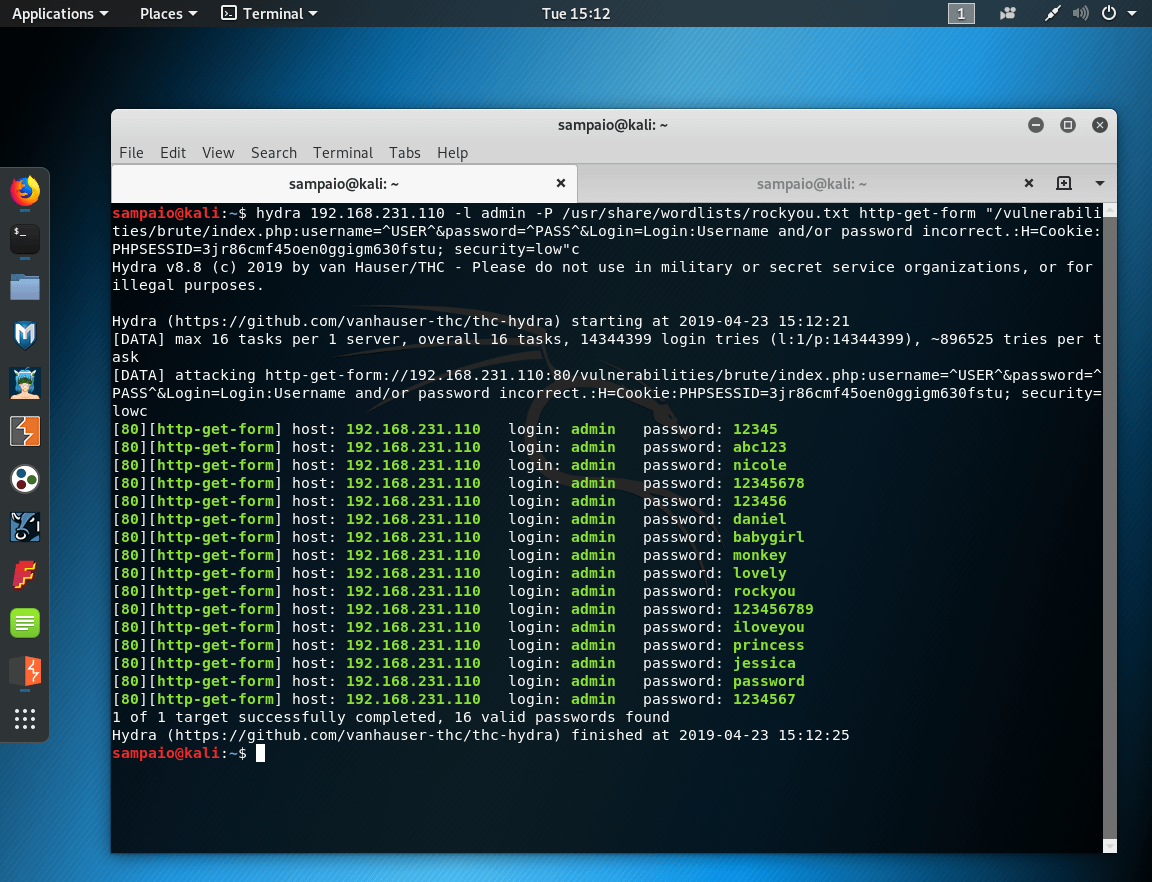